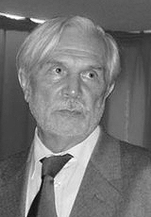 We presented poster art made by Karel Machálek-Zlín in November 2008 with his personal attendance on his exhibiton in kino Svetozor.

Karel Zlin, was born as Karel Machalek, July 23rd 1937 in city, it name takes as his pseudonym.

He got his artistic talent after his father, painter Karel Machalek. He had studied at High school of art and design in Uherske Hradiste, then he continued in years 1957-63 at Academy of Visual Arts in Prague.

He entered public space in 60s not only as poet, but as designer as well (cooperate with Spala´s gallery, directed by Jindrich Chalupecky). He visited Paris for first time in 1967, next year he lived in Rome and Florence. After soviet occupation he briefly cooperated with düsseldorf gallery Wendorf-Swetec and on 1st July 1976 went to study in France. He worked in Nogent-sur-Marne in ex-studio of sculptor Marcel Gimond in 1977. He was preparing own exhibition, which Paul Gauzita Lyon gallery offer him. When czech embassy refused prolonging his stay before he finished the exhibition, he ask for asylum.

He worked in paris studio in Rue de Louvre and cooperated with artistic foundry led by Coubertin foundation in Saint-Rémy-ls-Chevreuse. In 1980 he published on his own his first poems “House of others”. Year after he got french citizenship. During goverment of Francoise Mitterand, in years 1992-1993, he realized contract with french departmend of culture on his most famous sculptures: Slunecni barka (for palace garden in Rambouillet) and Antropomorfni architektura.