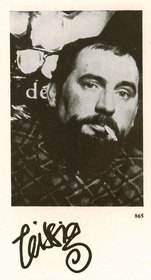 Studied at the school of painting of the Association of Visual Arts Mánes in Prague (1943-1945; Josef Liesler, Jan Bauch, Stanislav Ježek), the Academy of Fine Arts in Prague (1945-1950; Vratislav Nechleba) and the Académie Royal des Beaux-Arts in Brusseles (1948, L. Devos). Has been exhibiting both on his own and in groups since the 1950s. His spezialization was in poster production, small-sized and applied graphics, illustration, book graphics and drawing. With his personal and remarkable style, he earned a place in the so-called Czechoslovak Poster School. He belonged to the most important and prominent artists, producing original film posters in Czechoslovakia (along with Karel Vaca, Zdeněk Ziegler, Milan Grygar and Josef Vyleťal). He designed film posters for the Central Film Rental from 1959 to 1989. The collection of Terry’s Posters contains around 100 posters of Karel Teissig, too. Besides that, we also have 70 book titles and almost 200 examples of his book illustrations.

Karel Teissig had studied Painting at the private school of V. Sychra in Mánes building in Prague (during 1943 to 1945). Furthermore, he continued to AVU (Academy of Arts in Prague) under the mentoring of professor V. Nechleba (1945 – 1949). During that time, he also visited Brussels, where he spend a year at the Royal Académie des Beaux Arts (1948; L. Devos).
Both home and foreign appreciation was granted to his creations most importantly in the formo f film and theatre posters, produced usually with the technique of collage and painting (he created approximately 120 of them this way). He was the master of collage in Czechoslovak poster art. He managed this technique perfectly and oscillated from its rough, „bloody“ rendition in the striking posters, such as: Young Törless, Landscape after Battle, What Happened at the Wildberg Castle, Black Jesus – to the delicate, laced collages, from which he sewed dream-like posters to the films such as: Latin Lovers (Le italiane e l’amore), Když má svátek Dominika (When it’s Dominika’s Name Day), Papilio, Opération Léontine. For the French film The Possessors poster, he has won an Toulouse-Latreca award in Paris, 1964. Marginally, he was also dedicated to the theatre posters (National Theatre, Semafor). He designed around 20 of them. In the 60’s, he also graphically edited a magazine called 100+1 Interesting Foreign Fact (together with Milan Kopřiva), where he contributed primarily in 1964 and 1965 with beautiful titles.
He has illustrated more than 150 books.
As an illustrator, he cooperated with the publishers Artia, Melantrich, Odeon, Práce, Vyšehrad, Mladé léta and so on. With his illustrative work, he accompanied an author publication called Prague – Prag (1979,1993).
The techniques used for his illustrations were often combined (scratched technique in nitro pressure, painted collage, pastel, gouache, monotype). In his independent artwork, he used to paint still life, figural compositions and portraits.
Professionally, he has published several books (1982 – About Draughtsmanship. 1986, 1990 – The Techniques of Drawing), contributed about painting to the magazines Listy, Zlatý máj, Bar et Man and others. He also becade a chairman of the Children’s Book Illustrators Club (1990 to 1996) and a member of an international jury at the Bienalle of Illustration in Bratislava (1997). He was a member of the Etapa group, as well.

Another posters not in our collection (2)