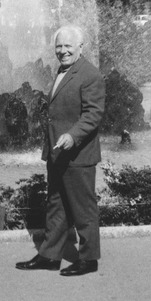 In years 1924-7 he was student of painter and graphic artist Alois Mudrunka, the professor of Academy of Arts, Architecture and Design in Prague.
He had studied graphic art and industrial visual art between years 1928-30 at Academy de la Grande Chaumiére in Paris.

He had worked for Leon Boue in Paris from 1929 through 1934 at advertising studio, which produce exhibitions for Shell, Texaco, Mobiloil, Renault, Citroem and Gas de Paris.

In 1947 he was designer of collective advertising studio B & R in Prague, he was working for n.c. TATRA, TESLA and became member of Union of cs artists.

He presented model design of trolleybuses and exhibited many different posters on member exhbition of Union of cs artist in 1951.

Another posters not in our collection (15)