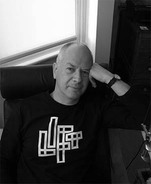 From 1968 to 1972 Andrzej Klimowski studied sculpture and painting at St Martins School of Art. 1973 to 1980 he lived and worked in Warsaw, the first two years of which he studied poster design under Professor Henryk Tomaszewski and film animation under Dr Kazimierz Urbanski at the Warsaw Academy of Fine Arts.

He has designed many posters for cultural institutions in Warsaw, Wroclaw, Opole and Lodz and collaborated with leading book publishers.

He directed Dead Shadow, a short experimental film shown at international film festivals in Krakow and London (1981). On returning to the UK, he worked freelance for Faber & Faber, Penguin Books and The Guardian.

Andrzej Klimowski’s works are in public collections including the Stedelijk Museum in Amsterdam, National Museums in Warsaw and Poznan, Library of Congress in Washington D.C. He has exhibited widely in the UK and abroad (retrospective exhibitions in Villa Bottini in Lucca, Italy (2000), The National Theatre in London (2001–2), The National Museum of Photography, Film and TV in Bradford (2003) and the Arsenal Gallery in Poznan, Poland (2006).

Robot; based on novel from Stanislaw Lem; 2008

The Depository; book cover and one page

More Than The Poster; catalog for exhibition; 2006

Untitled (from On Illustration); linocut; 2010

The Secret; sequence of illustrations from novel; 2002

Whose computer reads your passport?; cover of New Scientis magazine; 1984

The Secret; illustration from comics; 2002

Another posters not in our collection (13)

The phantom of liberty; movie poster; 1983