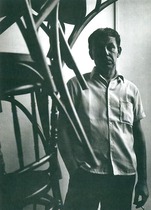 He focused on stage production after his studies, and he distinguished in it.
He cooperated with E.F. Burian theatre from 1953, between 1962 and 68 with theatre Na Zabradli, from 1969 mostly with Cinoherni klub.
First painting inspiration of surrealism (Deux visages, 1945) Fara slowly transfered to poetic absurdity, which he realised by collage technique or assemblage. He belongs to founder of Czech action stage design. He is well know because of designs for Jarry´s King Ubu (1964), Waiting for Godot (1965), Cechov´s The Kirschgarten and Hrabal´s Gentle Barbar (1981). He designed the cover and graphic for magazine Theatre between 1958-1970, he participate on graphic layouts of almost all important publications about theatre.

Another posters not in our collection (10)