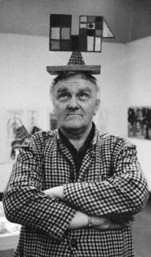 His extraordinary graphic visualization is characterized with decorative stylization and freedom in expression.

His early works reflexing war reminiscences (Furor teutonicus, 1944 / Superhuman, 1944), later he moved to grotesque hyperbole realized with significant lines and flat color layers (Beatle). After second world war he focused mainly on graphic, illustration, puppet or feature movies (Paraplicko, 1957; The Lion and song, 1959; Biliar, 1961; Wrong painted chicken, 1964). He was author of books for kids, for example. What I saw and heard in grass (1965) and Butterflies (1966).

He worked as art editor in Czechoslovak writer publishing company. Should be mentioned his work for theatre stages. He cooperated many years with National theatre in Prague, he was awarded with silver medal in 1967 for costume design for Stravinski balet Petruska. Covers and graphic layout of texts for Bohumil Hrabal books belongs to the best of czechoslovak typography. He returned to painting in 60s.