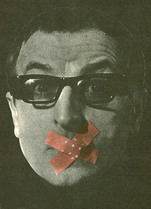 He published his first drawings in student magazine H2SO4. He exhibited figural composition in foyer of theatre D-38 in 1937. After the war he has worked on political posters and caricature. During 60s he focused on free and illustrated collage. He published in many magazines and illustrated many books, he created movie posters too. He emigrated in 1969 (Munchen), where he had continued in illustration of books for many german publishers.

Another posters not in our collection (3)