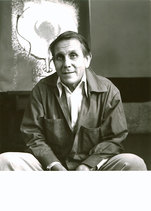 After agreement with a family of Josef Flejšar we started to process this significant poster inheritance. The presentation of more than 500 posters on our website is a first result of our documentary activity. It will continue in following months and in future should lead to a separate website dedicated to a complete work of this leading creator of a Czechoslovak poster.

He studied between 1945 and 1947 on Academy of Arts, Architecture and Design in Prague in studio of used and promotional graphic art prof. Antonin Strnadel.

After graduation he joined advertisment studio Schlosser, later cooperate with group of promotional artist in collective group of artist Tvar, which fusing during 50s with advertisment group lead by Josef Burjanek and Remo (Advertisement and fashion) so the collective called Promotional production was founded.
He created posters, book illustration and design. He participated on design of expositions for fairs (EXPO Brusel, EXPO Montreal).

Josef Flejšar has often appeared in the role of a graphic designer – magician, a graphic designer – wizard. He enchants us even by those bits of disharmony which we would normally reject.
His posters have been for decades an integral part of the atmosphere of our homes. They are signs of his time which cannot be overlooked or forgotten, for Flejsar’s posters bear Faust’s augury of humanization, they humanize every thing and every relationship.

In the development of the Czech graphic design of the second half of the twentieth century Josef Flejšar’s posters represent a crystallized individual style inspired by modern conception of concentrated information and of the form of the poster as an understandable and graphically effective symbol.
The family background influenced by the profession of his father, who was a typographer, his studies of typography under Professor Jaroslav Benda at the School of Applied Arts in Prague, and the influence of proficient draftsmen Prof. Antonín Strnadel and Karel Svolinský soon proved inspiring for Flejšar in his search for an individual graphic style.. Cooperating as a designer in setting up etnographic exhibitions in Prague, Brno, Cheb, Karlovy Vary, Aš, Uherské Hradiště museums and in other cultural institutions he attained an outstanding knowledge of the aesthetic legacy of folk art and grew more interested in glass, furnitur, ceramics and textile painting. He participated in designing Czechoslovak exhibitions in the Framework of international shows where he became acquanted with current tendencies in the world graphic art and deepened hes awareness of his Czech cultural background.
The fact that Flejšar was a member of the Bilance group illustates his integration into the generation of progressive artists and art theoreticians who, in the fifties when the officially proclamed theory of Socialist Realism often hindered innovating efforts, drew upon the inspirátory programme of the Czech Advantgard between the wars.
At the beginning of the sixties Flejšar mastered the silkscreen technique, which deepened his graphic flair andenriched his artistic expression. The increasing social prestige of poster creation and the growth of collectors’ interest in it at the time issued from the changing cultural climate in Czechoslovakia and from the development of visual communication in the world; graphic design shows began to be organized regularly and, as a result, special museums of poster were founded.
Unlike in the advanced industial countries where the trend was to create highly professional and specialized teams of designers, the majority of Czech graphic designers continued to combine poster design with other graphic activities.
Josef Flejšar ranks with the art personalities in whose production posters have dominant position. They attract him for their close connection with everyday life, broad social impact and the democratic character of aesthetic message. They enable him to express his views of important social, ecological and political problems of the present.
The impressiveness of Flejšar’s poster sis based on the tension between a rational linear composition and the emotive relationship of the artist to the subject matter. The refined simplicity of an individual and integrative style in which the word andthe picture are connected to form a harmonious whole reveals a deep intellectual insight and the urge to discover the essence of phenomena, events and storie. The sober contrastive coloration underlined in places by a complementary accent increases the intensity of his expresion.
He often draws his subject matters on the performances of the Prague National Theatre and Laterna Magica, on top ballet performances, significant exhibitions and cultural events. I tis mainly in the case of theatrical themes (Faus, Hamlet, Ulysses) that Flejšar succeeds in expressing symbolically generally valid truths. The posters for the operas Don Giovanni, Water Nymph, or Rigoletto prove the affinity between Flejšar’s musical and graphic talents. The rythm of his brush strokes and lines, and the spontaneous picturing capture the atmosphere of musical motives.
His exhibition posters of the eighties show an effort to give his calligraphy an individual graphic form with playful and humorous allusions. (Poster-Flejšar, XI Biennale of Graphic Design, Brno). Like many other graphic designers, he solves the many years’ crisis of the political poster realizing own prints. Theresienstadt, dedicated to the memory of the Jewish ghetto in Terezín, was awarded one of the three main prizes at the Fort Collins Biennale 1985 (an exhibition of world famous graphic designers, Colorado, U.S.A.) together with the posters by Roman Cieślewicz and the Rainbow group, Lienemeier, van de Sand). Einstein’s theory of equivalence of mass and energy applied in nuclear physics expresses, in Flejšar’s understanding of the Peace Equation (1987), relativity of human existence in the atomic age; it is a graphic appeal for peaceful use of scientific knowledge.
Josef Flejšar’s production is represented in the collection of graphic design in the Moravian Gallery in Brno by the most successful and impressive posters which illustrate well his artistic growth. Like his reflective works with international message, they show clearly the links between his work and the folk tradition, his lyrism and emotive Czech disposition. His graphic art is a perennial value; it revives events and moods of the past, makes the spectator reflect on the pressent, and harmonizes the enviroment by its formal and aesthetic perfection.

The 1st International Triennial of Poster in Toyama; 1985