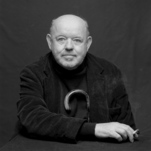 He was one of most famous polish graphic designers. He created posters for movie, theatre, circus and for many others themes.
He designed covers and layouts for magazines as in Poland or in France (You and me, Opus International).
He devoted his free art to collage and photocollage

Since September 1963 he settled in Paris where he has become famous. In the period 1966-1969 he worked as artistic director of Elle. He colaborated with M.A.F.I.A. agency and magazine Vogue. He designed posters for many years for Centre National d ´Art et de Culture Georges Pompidou. He took part in numerous competitions where he was frequently awarded.

We were able to compile this profile thanks to kind help of staff of Muzeum Narodowe in Poznan, Mrs. Anna Grabovska-Konwent and Mrs. Irena Przymus. We gathered informations from their catalog ROMAN CIEŚLEWICZ 1930-1996 which was published for exhibition in Poznan in 2006. We are very grateful.

Another posters not in our collection (87)