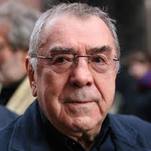 In 1946 he enrolled in the State School of Fine Arts in Katowice, changed into State Higher Schoole of Fine Arts in 1947 and subsequently incorporated into Fine Arts Academy in Krakow as Graphic Arts Department (currently an independent Fine Arts Academy). He graduated in 1952 in Professor Józef Mroszczak’s faculty. Persuaded by Mroszczak, who became graphics manager at the WAG publishing house, he moved to Warsaw. Initially he cooperated mainly with WAG and CWF1, later on he established connections with theatres and publishers in Warsaw and then also all over Poland.

He got commissions from abroad as well. He designed posters and other graphic forms for advertising agencies and publishing houses in Denmark („Minerwa“, „Munksgaard“), Holland and Western Germany, theatres in Münster, Osnabrück, and Bonn. On top of that, he designed graphic concept of the Polish pavilions at the International Fairs in New York (1958), Leipzig and Vienna (1959), Casablanca (1965) and Poznan as well as Polish industrial exhibits in Beijing (1961), Moscow, Minsk, Leningrad and Tbilisi (1959, 1969). 1965 through 1994 he lectured at the State School of Fine Arts in Poznan as Head of Design Graphics Studio. In 1994 he became Head of Poster Studio at the Warsaw Fine Arts Academy Graphics Department. In addition, he had numerous lectures in Havana in 1970, at the University of Mexico 1979 through 1980, he taught at the Hochschule der Künste in Berlin in 1985 and in Kassel in 1989.
He worked as a jury member of many international poster exhibitions and competitions: in Brno (1978), Fort Collins, Colorado (1978), Mexico (1979), Lahti (1981), Toyama (1988), Sofia (1995) and Warsaw (1984, 1986 and 1996) to name but a few.
1979 through 1994 he presided over the International Poster Biennale in Warsaw.
A member of Alliance Graphique Internationale (AGI) from 1966.
In 1997 he was awarded the title of Honorary Professor of Jan Matejko Fine Arts Academy in Krakow.

A Month of Building Warsaw 1953. The entire nation is building its capital; 1953